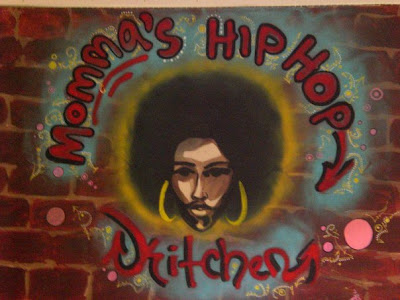 The concert of the YEAR, went down on MARCH 7th in the Main Theater of Hostos Community College - MOMMA's HIP-HOP KITCHEN. Over 1000+ people showed up. People, sadly were even turned away. From the main floor to the balcony it was PACKED! Folks came out to support the women of color who are holding it down in Hip-Hop right now. It was an honor to participate, to be a part of the team that brought this to life and to be a witness and see how much it ment for people. So many people came up to me young and old. A 5 year old little girl told me how much she loved it. I was amazed at the response from the young ones. It was legendary. 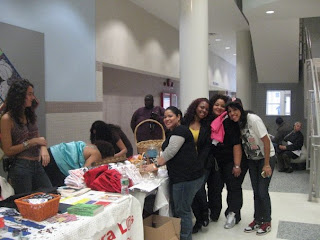 To have bgirls, graffiti writers, emcees, poets, painters, dancers, etc. It was amazing. have i said that enough already? lol.. One of my most memorable moments was when I stepped on stage, Bless Roxwell introduced me. The crowd was loving the sistahood! I threw on one of my favorite beats "Off the Books" by the Beatnuts on. That track is known for having the best of the Latino men on it. Pun, Fat Joe etc.. I wanted to have the ladies rock with it, my dream was to get as many females on stage and just jam togetha. Neva seen it done and as an emcee I've neva done it myself.....a surprise to the audience was when I brought out Lah Tere and told the rest of the girls to come out and get busy. So on one stage we had Rokafella, QueenGodis, Misnomer(s),La Bruja, Bless Roxwell, Lah Tere, Rosa Clemente, MisConception, Atlas, Likwuid, Kathleen Adams and more.. it was insane. The crowd was on it's feet. Imagine all those folks just smiling and feeling good. Folks didn't wanna leave. The school safety was trying to get us out. Shout out to the fellas like K-Swift, Homeboy Sandman, G1, Rodstarz, Interstate P &Rephst 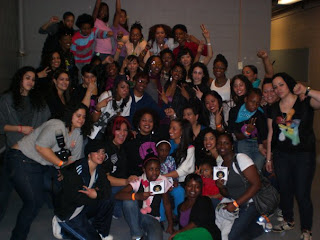 ar for holding it down for the ladies. Our fellow male emcee's and artists were in the building. It was all love. Truly! I can't wait for next year. We definately need a bigger space. A place where the Popo can leave us alone and where girls can just do their thing... we are all the shit! & HIP-HOP is ours. The engery and excitment can't be duplicated. People are still talking about it.... It was history, it was like the community's version of like a Hot 97' summer jam. but only females? neva been done!!!Watch out the ladies are here.... and only greater things to come.. i promise!
all in fun.. but seriously i got goosebumps on that stage. Can you feel it?
Something magical is happening.
and i'm calling it now.. the 5 DEADLY Venoms - Latina version...
LA BRUJA, PATTYDUKES, LAH TERE, TOOFLY and ROKAFELLA 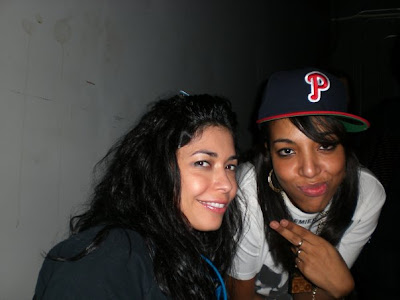 (In the Pic: La Bruja & PattyDukes)

and for those who don't know the ....
Five Deadly Venoms is a cult 1978 Hong Kong martial arts film directed by Chang Cheh about five kung-fu fighters with unique animal styles: The Centipede, The Snake, The Scorpion, The Lizard and The Toad. 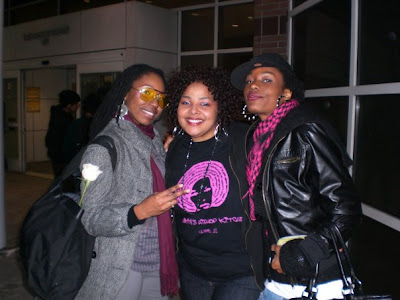 (In the pic: QueenGodIs, Lah Tere and Bless Roxwell)

Thank you to all who came, those who supported and those who believed. The organizations like
CASA ATABEX ACHE' who held it down and continue to do the hard work on the frontlines with the community & young women all over. To Esperanza Martell for having our back. And lastly my students from the Bronx Acting Ensemble who came and represented for DREAMYARD.