Skip to main content
Labels
Posted by Unknown May 11, 2010 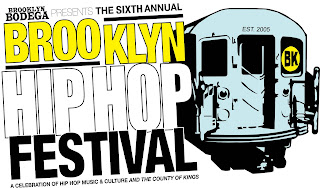 BROOKLYN HIP-HOP FESTIVAL ANNOUNCES 2010 Headliner
DE LA SOUL
Brooklyn Bodega, producers of the 6th Annual Brooklyn Hip-Hop Festival (BHF), is excited to announce this year’s headliner - De La Soul.  Since 1989, De La Soul (Pos, Dave and Mase) have been a cornerstone of Hip-Hop music and culture.  From the groundbreaking album “3 Feet High and Rising” to “Grind Date” De La is simply one of the best to ever do it.
“To be honest, we have been trying to get De La Soul to headline the Festival since we first came up with the idea in 2005.  On many levels they are the perfect flag bearers for our mission to use Hip-Hop as an agent of change. For over 20 years they have traveled the world inspiring MC’s, producers, DJ’s and fans alike.  I can think of no better artist to usher the Festival into its new home in Brooklyn Bridge Park.” – Wes Jackson, Executive Director, The Brooklyn Hip-Hop Festival. In past years, the Festival has featured headliners such as Brand Nubian (2005), Big Daddy Kane (2006), Ghostface Killah (2007), KRS-ONE (2008) and Pharoahe Monch (2009). This year, De La Soul will be the anchor of the six-day-long Brooklyn Hip-Hop Festival, performing on Saturday, July 10th alongside a variety of Old School, New School, Funk, Soul, local and International artists on the DUMBO waterfront.
DATE: July 10th, 2010   TIME: 12-8PM
LOCATION: Tobacco Warehouse and Brooklyn Bridge Plaza
(26 New Dock Street, Brooklyn, NY)
Tickets go on sale Monday May 3rd at www.BrooklynBodega.com, the official home of the Brooklyn Hip-Hop Festival. On this date, organizers are launching theBodega Soldiers Program, which is their way of thanking the members of the Bodega Family who have turned out time and time again to make the Festival into NYC’s largest Hip-Hop cultural event.

PLEASE NOTE: Those Bodega Soldiers who purchase their tickets by May 21st will get access to premium packages at no additional charge. Anticipated perks include being on a priority mailing list that receives all Festival announcements prior to the general public, admittance to a reserved section next to the stage, ability to enter exclusive raffles, priority check-in at the Main Day venue and a FREE commemorative souvenir. Bodega Soldiers will also automatically be entered to win backstage VIP packages.

The calendar for the 6th Annual Brooklyn Hip-Hop Festival kicks off with Show & Prove on Monday, July 5th.  This Hip-Hop showcase of independent and local talent is the final event of Brooklyn Bodega’s three month Show & Prove competition,

Wednesday, July 7th is a mini Film Festival that features a variety of Hip-Hop films and a Q&A with established and burgeoning filmmakers.

Thursday, July 8th is a night dedicated to the backbone of Hip-Hop: the DJ. It will feature performances by the best DJs, from NYC to LA.

Friday, July 9th is the kick-off party to formally welcome Festival goers, past and current artists and community leaders to the 6th Annual BHF.

Saturday, July 10th is the culmination of the 2010 Festival. De La Soul, just ahead of a new album to be released this year, will headline on the DUMBO waterfront. Earlier in the day, we set it off with Family Day - a block party for families and children that celebrates the core message of Hip-Hop - social change and individual empowerment.
Email Post
Labels: Brooklyn Bodega Brooklyn Hip-Hop Festival circa '95 de la soul