Skip to main content
Labels
Posted by Unknown May 14, 2010 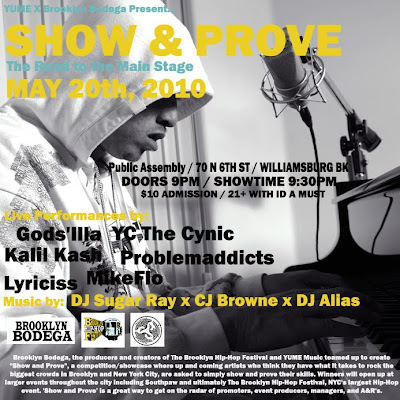 Brooklyn Bodega and YUME Presents: Show & Prove takes place Thursday, May 20th at the Public Assembly, 70 North 6th Street in Williamsburg, Brooklyn. Local and independent talent will get the chance to put their skills on display in the heart of the hip-hop nation. The winner will earn the right to rock this years’ Brooklyn Hip-Hop Festival stage with some of Hip-Hops’ most legendary figures such as De La Soul, Smif-N-Wessun and Buckshot.
MAY SHOW and PROVE PERFORMERS:
YC the Cynic: Coming from Hunts Point, in the South Bronx, YC brings the Hip-Hop scene back to its birthplace while bettering his community as part of the Rebel Diaz Arts Collective.

Kalil Kash: Hailing from New Jersey, Kalill Kash is on the seemingly endless struggle to be heard as an Emcee. No need for him to brag, his music speaks for itself.

Gods’Illa: With the ability to tell stories through powerful rhymes that transcend life, Gods’Illa of Brooklyn by way of Maryland promises to truly be a cut above the rest. The brothers in this group vary in age as they do in style crafting a sound collectively described as “Universal.”

Problemaddicts: The Problemaddicts are a 5-man squad of emcees out of Massachusetts assembled by and including Executive Producer Tone, Vorheez (formerly of Lords of tha Fly), Force (also of The Alchemystics), Black Buddha (multiple freestyle tournament winner and former WSKB DJ) and 1ne Man sound (also of Lyke Minds).

Lyriciss: This DMV Emcee has been inducted into a group of elite musicians with URB Magazine’s Next 1000 Program and has built a strong presence as an up-and-coming force on the world’s most credible music blogs and websites, including 2dopeboyz.com, illroots.com and many more.

MikeFlo: While in Atlanta, New York’s MikeFlo linked with U.N.S.I.G.N.E.D., a collective of 5 emcees from different regions. His straight ahead, nonconformist style earned him the respect of his peers and innovative stage performance makes him a crowd favorite.
-----
What: Brooklyn Bodega and YUME present May Show & Prove
When – May 20th, 2010
Where - Public Assembly, 70 North 6th Street, Williamsburg, BKNY
Damage: $10
Age: 21 and over
-----
For more info on The Brooklyn Hip-Hop Festival visit our Facebook page, website and follow us on Twitter
-----
Email Post
Labels: Brooklyn Bodega Brooklyn Hip-Hop Festival circa '95 Show and Prove The Rebel Diaz Arts Collective YC The Cynic