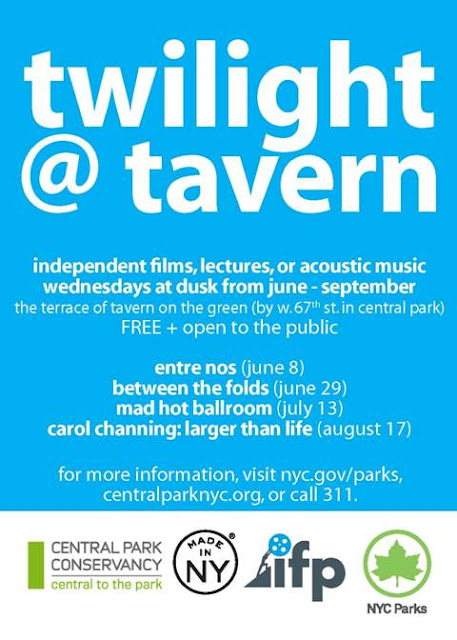 “Twilights @ Tavern,” on Wednesday evenings throughout the summer, will feature a regular film series in partnership with the Mayor’s Office of Media and Entertainment and the Independent Filmmaker Project (IFP) as well as lectures and live acoustic musical performances.  The film series will showcase independent “Made in NY” films such as Entre Nos, Between the Folds, Mad Hot Ballroom, and Carol Channing: Larger than Life, as well as New York-based foodie TV shows Appetite City and Food. Curated, which air on NYC life (channel 25), part of the official network of the City of New York.  Representatives from the films and shows will address the audience before each screening.
Throughout the summer, lectures will focus on topics related to the natural environment, urban issues, and parks history; the musical performances will highlight NYC-based musicians. Other ongoing Central Park Conservancy programs to be offered within “The Scene @ Tavern on the Green” include regular fitness activities and classes called “Fitness Fridays”, weekend children’s activities called “Kids on the Green”, and tours of Central Park that meet on the Tavern terrace. For more information visit  nyc.gov/parks
Email Post
Labels: Central Park Conservancy circa '95 Films free IFP Made In NY NYC Parks